Television – A boon or a bane? 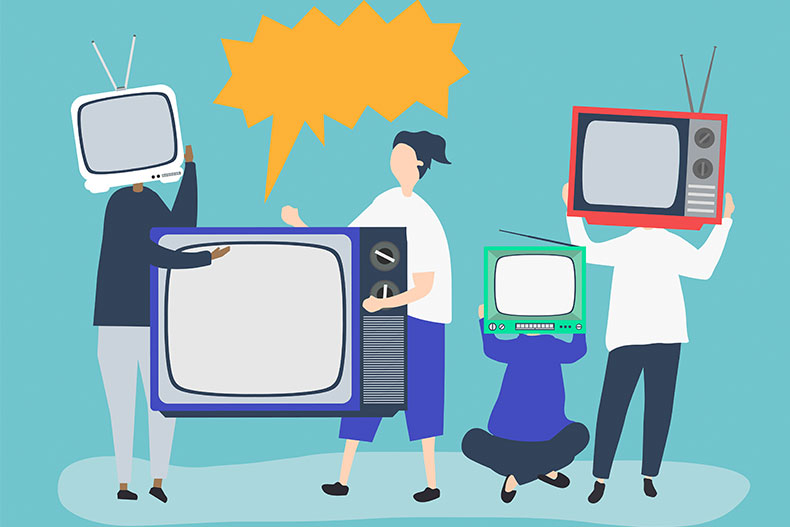 Television: The Knight in Shining Armor

Television has a great impact on all of our lives. There’s hardly being a day in our lives where we’ve not watched TV even for 15 mins. It most definitely plays a vital role in our lifestyle. Along with being a source of entertainment television is for educational means as well. It broadens knowledge of different cultures, events, International issues etc. It has definitely been a chunk in our joviality as well in our meltdown. Television is a “go-to thing” in our inadequate state of mind.

That’s pretty obvious that when we talk about television everyone does not come to a unanimous conclusion, there is at least one person out there who’s opinion might differentiate than the others. Besides this there is this evolving generation of parents who believe that television is not evil as we think it is. It brings few of the important skills in a child like linguistic skills, dictating skills, art and craft skills even empirical knowledge, this helps child to grow in a very vivid manner. Television has different things to offer to various age groups like for children there are educational channels as well as entertainment channels consisting cartoon, for teenagers and working generation there are news channels and geographic channels also daily soaps for entertainment, for older group of people there are variety of religious channels. With this we know television has something or the other for each and every one.

As said before parents are often worried about children spending too much of their time gazing at the screen, well that is a problem too much of the time watching television does cause harm to our sight and audible skills as well. We need to have certain limitations regarding the time we watch TV continuously because everything good need to be consumed in consideration.

Television, like any other technological innovation, comes with a caveat – watch too much and you open a bag of ills!

Why is it that we call television our saving grace?

Now let’s see why TV is so vital and how it is beneficial for others. If you don’t agree to us, read the blog till the end we might be able to change your opinion.

1. The influence of TV in a living room

We all agree to the fact that television has a great impact in our lives, the way we live our lives etc but it also has an influence on where we place the TV in our house. Moreover, tv is placed in a common room where all the family members sit and relax which definitely has to be the living room. So now let’s see how TV influences the living room. For that, let’s do one activity and by the end of the activity I am sure we’ll be on the same page. Let’s begin.

Being honest, even if you have 2 fingers raised like everybody else sitting next to you, don’t worry you are not dealing with any kind of addictive disorders, these are just habits which are to be found in every next person.

The classic time where all the members of the family used to sit down and chat on the daily events, sharing a meal together, enjoying themselves with classic folks and most importantly children getting amused by the thrilled adventures of their grandparents while they were young is changing. Now we have adapted the western lifestyle and its definitely difficult to change back to our Indian roots. Television has become a part of each and every activity we do, we watch TV while we consume our meal, we watch TV and never chat even when all the family members are in the same room. We are habitual with this lifestyle and TV playing vital role in out lifestyle. But as it is said every Era has it’s ending probably the Era of Television is also ending and it is mainly replaced with a tiny little thing we call as Internet.

We are familiar with the whole trend of Smart TV that is going on everywhere. Smart TV also known as connected TV as the name suggests creates or builds a connection. We can connect AR/VR games or can also connect to any online streaming platform like Netflix. Smart TV also gives us the option of Screen mirroring which is so fascinating. Developing technology is bringing elevated changes in Television as well. Probably our children won’t even see a classic television at any of the houses. The classic television is to be said “old fashion” now. We all are evolving and amusing ourselves with the latest technological changes happening all round the globe. In future there is endless possibility that Television might be use just for entertainment and education. We will learn new skills about how we can discover the world and maybe become fit as a result. Yet also comes a caveat of great promises.

3. The pronouncement of living with a TV

As mentioned earlier, everything good need to be done in moderation. It is extremely necessary to guide ourselves a line of limitation specially in the Era of Smart TV. It is necessary to maintain a discipline when it comes to watching television, it is unlikely but there is always a chance where we might lose the sense of reality and live moreover within the fictional reality that has been created around us. This sounds abrupt but it is really related to the movie “The Matrix”. We all know at least one person who is just addicted to social media and needs a therapy for their addictive behaviour. This is because there is no discipline or moderation to have and when to utilize TV and Internet.

We are not saying to stop watching TV or to stop using internet, no because that is beyond difficult but what we are saying is using it is moderation. It’s high time where we understand the thin line between moderation and over use of digital appliances.

Only the time will inform us about what future holds for us until then let’s get a popcorn and watch the show.

Television – A boon or a bane?

Habits for the 21st Century

Education – The Pursuit of Knowledge or Marks?

The Future of Online Learning after COVID 19